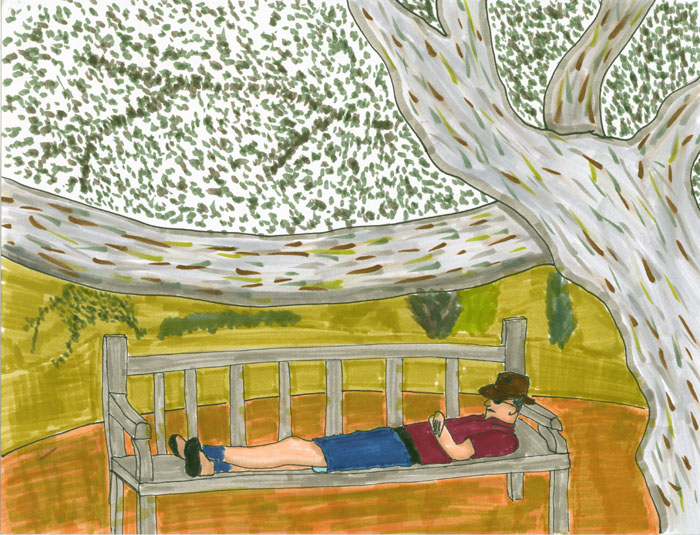 Carl Sagan has been one of my heroes for years.  In 1978 he filmed his groundbreaking television series "Cosmos".  Part of the series was filmed in the Royal Botanic Gardens at Kew, in greater London, England.  In one scene Dr. Sagan stands under a mighty Oak tree, leaning against one of its huge branches and casually explains how Humans and Oaks are distantly related to one another.  This tree is then used as the template that represents the Tree of Life on Earth.

This tree has been unofficially named "Sagan's Oak".  As we planned our third trip to England (in 2000) we included a trip to Kew in our itinerary.  My goal was to find Sagan's Oak and to stand in the footprints of the Master.  We arrived at Kew and went in.  And promptly discovered that this "garden" covers 300 acres.  I decided that finding the tree would be virtually impossible, but I was going to try.  After several hours I was willing to call it a day and give up on my quest to find the place where Dr. Sagan taught me about my relatedness to all life on Earth.

A few minutes later we rounded a corner on the path, came around a hedge and saw it, standing by itself in a clearing.  It was a psychoacoustic moment for me.  I could almost hear the choir making the dramatic chord behind me.  We walked to the tree and I stood in the exact place where Dr. Sagan had given his speech.  As Sheila taped me, I gave the speech, as best as I could remember, then settled down to wander around the tree, basking in the glory of Carl Sagan and the Tree of Life.

Eventually I settled down on a bench to contemplate the world.  Finally I leaned back and stretched out, while considering the awesome majesty of science.  It was at that point that Sheila snapped a photo of me that I love.  This drawing is taken from that photo, and is my homage to Dr. Carl Sagan

Back to Walt's illustration page